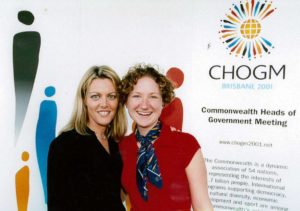 In October 2001, on the eve of the Commonwealth Heads of Government Meeting, we got news it had been cancelled.

​Working for months, around the clock on an event, only to have it pulled out from under you is one of the strangest feelings and moments I have ever experienced. In February 2001 I was offered a job in the Media Operations team at the Commonwealth Heads of Government Meeting, packed up the car, headed up the Newell Highway from Melbourne and settled into life in Brisbane.

This wasn’t my first rodeo. I had previously relocated to Sydney for the 2000 Sydney Olympic and Paralympic Games. I knew the drill, we worked hard, mainly socialised with our event colleagues and our whole life centred around the event.

It didn’t seem weird to work until 2am because your colleagues were often doing the same hours. When we had spare time, we hung out with our event buddies because they had all moved away from home for work too. It was like a (very full on) working holiday. We didn’t have family and friends there to snap us back into reality.

Like many events, as it got closer, the hours and pressure increased – particularly for an event of such international political standing.

At the time you think, and are led to believe, that the whole world is watching this event. You soon realise that’s not the case.

One night, as we worked back late (of course), preparing for our first Volunteer Induction, my manager’s husband rang to say a plane had flown into one of the Twin Towers in New York. We immediately raced into the boardroom and turned on the TV to see for ourselves. At that moment, everything changed – but at the same time, stayed the same.

With CHOGM due to start on 6 October we faced constant uncertainty – would it go ahead, would it be cancelled, should we keep working, what do we tell our volunteers. Would it be threatened by terrorism? Would it be safe? Would world leaders travel out to it? Would action be taken against the Middle East and change the international world?

We were constantly assured that it would go ahead but everything else indicated otherwise. I remember working in the office on a Sunday just a week or so out when Foreign Minister Downer commented in an interview that ‘it might not go ahead’. Surely they would tell us, we thought. Surely they wouldn’t allow us to keep working these crazy hours if it was going to be cancelled.

Of course the reality was that it was an ever changing environment.

On Friday 5 October, we had packed up our desks ready to move to the venue, with the Media Centre opening the next day. Everything was packed into boxes, we didn’t even have a pen left out. We were exhausted but excited to get the event underway. We were running on adrenaline and knew it would carry us through the next week. We were ready.

I had even had my event haircut!

Then the call came. It had been cancelled. (We actually found out from the media first – an example in poorly coordinated communications…..)

We were immediately called in for a staff briefing and explained why the decision was made.

Then it was on to immediate actions we needed to take:
– call all our volunteers so they heard directly from us, rather than reading it in the media (of course it didn’t always work that way)
– notify casual staff who we were due to start over the next couple of days
– notify any suppliers (newspaper deliveries etc) that were booked in
– unpack our boxes
– have a taskforce get together that almost took the form of a wake
– work out what to do on weekends that we now had free

(We didn’t need to notify the media – they already knew since it had been sent out on the wires).

Then the shock set in. When you are running on adrenaline but you no longer need it, your body and mind reacts. I was exhausted but edgy, my mind was running but I had now stopped abruptly. I had all this adrenaline but nothing to do with it. We had worked tirelessly for months on end….for nothing. I now had my short manageable hair for no reason!

The weekend was the most surreal thing I have ever experienced and a complete daze.

On Monday we returned to work and it was a case of what now. With a federal election called not long after, the government went into caretaker mode which meant no decisions could be made on the rescheduled event. For over a month we were in limbo.

While it was a strange time it also taught me a lot. Lessons that I have carried through life. Here is what I learnt:

Allow yourself time to grieve
Life will go on – but you have gone through shock. Allow yourself time to grieve what could have been, process what has happened, talk to friends and family and tell them how you are feeling. You don’t need to immediately bounce back to being OK. You can feel down, worried and confused and that’s OK. At the time it will seem the biggest thing in the world but you will get through it. The more you can talk about it, the more manageable it will become.

Focus on what you can control
There are so many, internal and external, factors that we can’t control. Focus on your area and what you can do. Each little step, each little action you can take, even if it’s just making to do lists, will help.

Do not look in the rear view mirror
Do not spend time on the ‘what if’s’ or ‘this is when the event should have been’. The event has been cancelled or postponed – that is fact. Focus on the future now.

Make the most of the second chance
How many times have you worked on an event and thought ‘next year we’ll make this change’ or ‘next time we can do this part better’? Well you now actually have that chance. Use all those learnings to plan an even better event next time – even if the format is different.

Get out of the bubble
Event life can often be an all-consuming bubble. This can be a good thing but it can also mean we feed off each other’s stress and worries. Make sure you invest in life outside events. Be kind to yourself.

We don’t know what the future will look like and that’s OK
No one knows when events will resume, how quickly they will recover or what they will look like in the future. And that’s OK. What is most important is that we can adapt and be nimble and not dwell on ‘what we used to do’ but realise there might be a new normal, for the short term anyway. What is certain though, is that events will return and we’ll be stronger for it.
​
Use the downtime wisely
Life goes on. Read those event blogs you have always wanted to. Listen to podcasts you have on your list. Catch up for coffee with people you have been meaning to. Read those books that have been piling up. Attend webinars you have never had time for. Even binge watch that Netflix series you have missed because of the long hours you have been working.

Maintain some normality
Maintain your routine (as much as you can). Let your routine be your anchor during the uncertain times.

We will need to adapt, on an almost daily basis, but we can and we will. It could be short term or longer term. The current situation will force us to think differently, do things differently, be innovative and that will almost certainly create some amazing results in return.